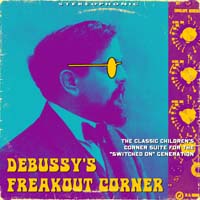 Children's Corner (L. 113) is a six-movement suite for solo piano by Claude Debussy. It was published by Durand in 1908, and was given its world premiere in Paris by Harold Bauer on December 18 of that year. In 1911, an orchestration of the work by Debussy's friend Andre Caplet received its premiere and was subsequently published. A typical performance of the suite lasts roughly 15 minutes.

The renditions in this album are on vintage synthesisers (as a homage to Wendy Carlos' Switched on Bach) and were generated from public domain MIDI piano performances on the occasion of my 52nd birthday March 10th 2012. I was alone, had the flu, and doing this fuelled by nostalgia for old synths and these tunes kept me happy.

There are six pieces in the suite, each with an English-language title. This choice of language is most likely Debussy's nod towards his young daughter Chou-Chou's English governess.

The six pieces are:

01 Doctor Gradus ad Parnassum
(Performed on the Moog Modular)
The title is a nod to Muzio Clementi's instructional piano pieces, Gradus ad Parnassum ("Steps to Mount Parnassus"). In the middle, the pianist slows down and tries his material in other keys for exercise. The pianist gets wilder toward the end and finishes the piece with a bang. It was the success of putting this piece together which inspired me to continue and do the whole suite.

02 Jimbo's Lullaby
(Performed on the MiniMoog)
This work describes an elephant, Jumbo, (in Parisian French Jimbo) who came from the French Sudan and lived briefly in the Jardin des Plantes in Paris around the time of Debussy's birth. It is a beautiful lullaby with some dark moments and whole-tone passages in the middle. This turned out much more interesting than I thought it would.

03 Serenade of the Doll
(performed on Mellotron and Yamaha CP70 Electric Grand)
This piece, in triple meter, is marked Allegretto ma non troppo (moderately fast, but not too fast). It is a description of an Oriental porcelain doll and features the Chinese pentatonic scale throughout. All black notes then?

04 The Snow is Dancing
(performed on B3 Organ)
This piece is apparently quite difficult to play as it requires precise semi-detached playing in both hands with the melody between them. Again, there are a darker moments in the bass near the middle. Thanks to the composer's remarkable colour effects, it apparently manages to describe snow - not rain - and muted objects seen through it. Yeah? I'm not getting it.

05 The Little Shepherd
(performed on the Ondes Martenot)
The Little Shepherd depicts a shepherd with his flute. There are three solos and three commentaries following them. This piece has different modes in it and uses dissonances which resolve into tonality, it says here. I think it's lovely on the Martenot. Reminds me of the old "Picture Box" theme. Any oldies out there recall that?

06 Golliwog's Cakewalk
(performed on a Clavinet D6)
This is a ragtime piece with its syncopations and banjo-like effects. The dynamic range is quite large and very effective. The cakewalk was a dance or a strut and the dancer with the most elaborate steps won a cake ("took the cake"). Yeah, gollies were popular toys when I was a kid, but for obvious reasons they have fallen out of favour. I always loved this tune though.

Hope you enjoy the pieces as they were enormous fun to do.